Lady of the flies

Where I Write About Product Design, etc

While frustrating, stressful and upsetting things happen in the non-blog world, I am trying not to write about them here as I feel it only makes me dwell on them more. I acknowledge them, but try and refocus for the benefit of not feeling drained all day. Also, it means I save money on bleach, giant bin bags, and duct tape. END_OF_DOCUMENT_TOKEN_TO_BE_REPLACED 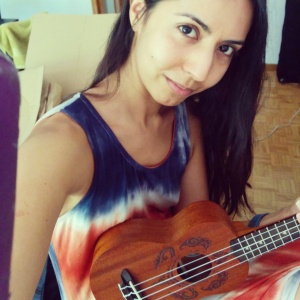 So, I decided I needed something fun & joyful to get me to finish my home based work within reasonable hours. Something with no fixed end goal in sight, something just for fun. A uke seemed adorable, and since it’s trendy right now, seemed like a good thing to form another social group for. Maybe a Spanish speaking one for some practice?

Anyhoo. a Uke needs tutorials. Here are my two faves so far. They teach 4 chords (the two teach slightly different chords) but it turns out that you only really need 4 chords to play a tonne of songs.

The first, easiest chord selection for me to do is with this tutorial.

The second, slightly trickier chord selection (I basically suck at the G chord! G7 in the above tutorial is much easier for me to get into and out of, and even that takes a lot of pausing)

I also put together a little playlist of ukelele tutorials for when these two tutorials get easier. And then for no apparent reason I created a second list that seems to basically be another tutorial list. I should sort that out, but for now, here they are.

Based on my current playing (and to be fair, it’s only been 4 days and I do have some other things going on..) it’ll be a little while before I’m playing “smells like teen spirit” or “enter sandman” =)

Also, here’s a free ukelele tuner for android, although I prefer guitar tuna with the paid ukelele add on because I felt my C chord was still out of tune (and it was) and I needed more accuracy.

What else? My Ukelele is by Luna. I was going to get a Makala dolphin in baby blue then saw the luna had a turtle print one and all bets were off. It came with a padded bag (not massively padded, but enough for casual travel within the city), nyglut strings, a chord book and tuning pipes. A very pretty instrument up close, and I love the mother of pearl effect tuning pegs.